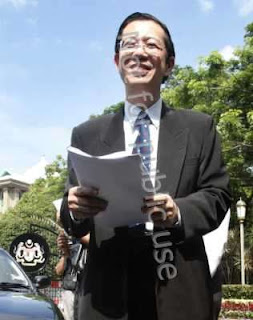 i was on my way back from penang and yes i had to fly airasia today(lets save the details for later) and after the usual loads of people that boarded the flight i was questioning myself why was the seat next to me been empty... humm maybe theres an engineer on board.. but usually they would sit near the galley.. then after a while my question was answered.. the gentlemen that came up and sat next to me was no one other than chief minister of penang mr lim guan eng... yes can you believe it the man himself sat right next to me... ok yet another bakizainal star struck moment.. wowwwwwwwwwwwwww... ok i would spare the details and the conversation that we had but the bottom line is that the man did what he had to do to be one and to really be the voice of the grassroot.. i salute him for that.. and so i am thinking maybe in a rather childish manner if you want to talk about understanding the "rakyat" and you represent the "rakyat" then think twice and think first if surely and are you really doing what you preach.. cayar lar Mr Lim!!!
Posted by Unknown at 11:37 PM