yesterday i went and send my cousin to the airport. from yesterday till the next three years he shall be posted in kuching, sarawak. well some say with him being a pilot and all its not a problem as he could always commute. but the problem with being born in this family is that all of us are soo close to each other and that we are always there for one and the other but then now its a different story altogether as he is in the foreign land alone.. some might just say that hey whats the big cry for its not a big deal but lets just say that its hard and even logic wont be able to answer this question as its not answerable.....anyways before he left he told me that its a new chapter and a new beginning for him there and soo i wish him all the best.. and at the same time yesterday i was called back for a 2nd interview and i nailed a job with alhamdullilah a good starting pay( i know hes there listening) and at the same time it might just alter my course in life. besides the new job an incident happend last week that will in a way change my course i will be leaving a group of people that i respect and loved. who understands my passion and my worries when it comes to my art. something that i know i would miss having. but then it does not mean that i shall leave my art.i shall still strive and struggle to find outlets of release and insyaallah i shall be able to do it. i see it as karma, i see it as fate, i see that Allah has his ways and has his intentions and plans and if i be steadfast enough then he shall guide me to the right path. but for now i shall ride the wave and see where it takes me. Cheers to "a new chapter in life!!"
Posted by Unknown at 1:07 PM No comments: 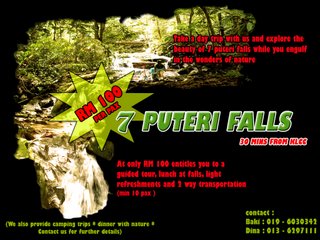 hey hey people check this out!!!! its still as virgin as can be.. its a 7 step waterfall in kl.

what you waiting for...

life is frozen currently... nothing organic about it. unexpected growth and advancements are happening without planning and actual process. what scares me is that now i am riding the wave like its meant to be normal. now i dont even know what is normal and what is not. but heck i'll just go with it and experience. with gods blessing i shall survive.
Posted by Unknown at 11:56 PM 3 comments: