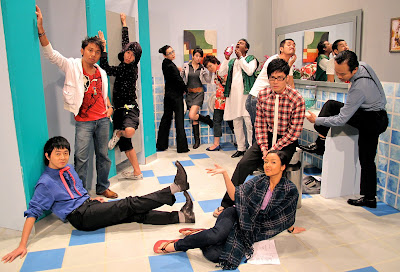 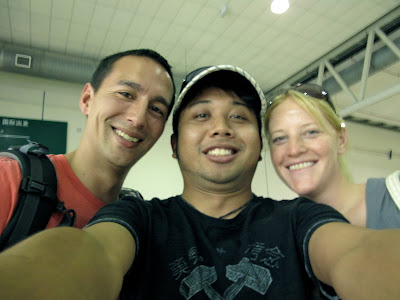 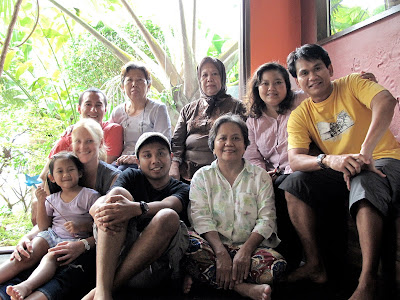 Andrew , Baki and Rhian with the family in KL

yeah finally i get to write ... today is my first official off day in 2010 yepp.. for the couple of weeks i have been working really hard.. alhamdullilah..
i finally wrapped up the second season of Mr Siao's Mandarin Class which will be hitting air waves this coming april.. yeay.. if you happen to catch it now on NTV7 well thats the rerun from last season.. this season it promises more fun, adventure and guest cameos of malaysia's big stars.. more updates on that on a later note.. but dont forget to catch the Chinese New Year 2 hours special airing on the eve of CNY and the first day of CNY on NTV7.. thats a special ang pow from all of us at Mr Siao's Class.. hehehehehehe...see amir, ying jun, hong hong, tashan and the others like you have never seen them before..
besides Mr Siao.. i have recently received a very special visit from my nephew Andrew Zaki Mcnally and Rhian.. yup they gave us a suprise by dropping by KL for a 3 day visit before they leave for London.. Andrew is my age and he is off to London to join the British Marines.. i could say that Andrew and me were partners in crime when we were little.. hahahahaha .. and for the past three days we jogged our memories back down memory lane.. man those were the days.. Andrew came and chilled at home with the family in KL and i juggled work and playing the role of a tour guide its tough but then it was worth it.. seeing him and finally spending taking time off to spend with my family kinda made me feel how lucky i am to have such beautiful people around me.. alhamdullilah.. i wish my nephew all the best in his road to success .. insyallah..
now i am still in the process of finishing the much awaited Step Forward for 8TV... waahhh really stressful stuff i tell you but its all worth it.. thank god i have the support of Kak Mas Ayu, Troy, Lucent and Kim Wah who is constantly there on shoot and pushing me to perform even better than i possibly think i am capable off... Step Forward will be priemiering this coming 21st Febuary at 9.30pm only on 8TV..
i had a conversation with Andrew the other day over drinks and we kinda agreed that we are really happy to see each and every one of us living life to the fullest and chasing all those wild dreams that we never even tot off when we were playing in the ditch and locking the a-ma in the broom cabinet.. but even so we are constructing those castles in the sky we still are those 2 little boys chasing each other up down the army barracks in sembahwang singapore.. hey as they say you can never take away the boy in all of us.. nite peeps...
Posted by Unknown at 8:39 PM

i never missed watch the sitcom!! i really love it.. the balik kampung scene really hillarious!!
anyway.. cant wait for the 2nd season.. wish the sitcom will last!!! send my regards to all cast.. love u guys!!!

Cant wait for the 2nd season of sitcom too !!!

u tht inside step forward is ok keep it u

I really think that you are an awesome actor, I can't wait for Mr.Siao season two! I don't know where to post this, so I hope here is alright.

I love how you act as Amir in that show, in fact, I like him so much, I watch Mr.Siao repeatedly in youtube and can even memorize some of the lines.

You are very inspirational too! I hope I can be like you someday! Cheers!